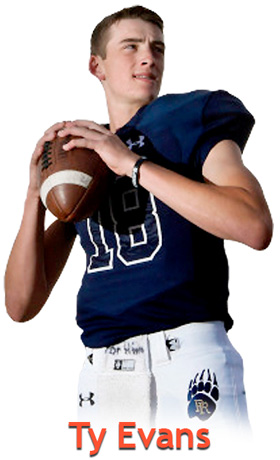 The 6’2, 177 lbs QB from Palmer Ridge High School in Monument, Colorado is surely securing a well-deserved national ranking for himself. Already having committed to his home state school (University of Colorado) as a junior in high school, the rising senior continues to work hard every day to be the best QB in the nation. Evans recently attended the Nike "Elite 11" competition where he earned an invitation to “The Opening” showcase on July 1-3 in Dallas, Texas. Evans will be among a select group of elite QB’s from around the country competing for the top prize and national exposure on ESPN.

Ty is the reigning Gatorade High School Football Player of the Year in Colorado. While in his junior season, he completed 72 touchdowns on only 12 interceptions! Although he's currently ranked a 3-star QB, he is pulling in high Division 1 offers. Michigan, Texas A&M, Ole Miss, and even Alabama offered Evans despite his early commitment to Colorado. Evans’ star ranking will certainly rise over the course of the summer and his senior season. He'll definitely be turning heads and opening eyes that have been sleeping on him. 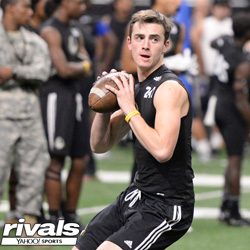 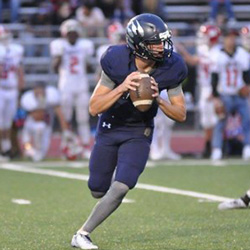 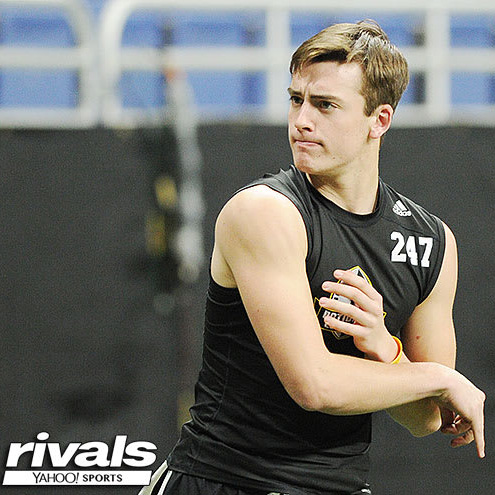 Evans comes from a very athletic family. He has two older sisters playing college sports, a father who played college baseball and a mother that coaches volleyball. Ty has been around sports all his life. Growing up, he enjoyed running track, playing baseball and basketball. In fact, he even made the varsity basketball team as a freshman, but after a year decided not continue on the court because it took too much time away from football. As a freshman, Ty was also the varsity back-up QB. During his first varsity game, Ty completed a touchdown on his very first throw. Since that moment, football has become his focus. Although he loves football, it's not his only hobby. He also enjoys spending time with his friends and family, long hikes with his dog and going to the movies. He also enjoys visiting sports retail stores such as Nike and Adidas; He says he thinks it would be a cool place to work. Considering he's an athlete with an interest in Marketing, shopping is probably far more educational for him than the average person.

Elite training comes courtesy of his QB coach, Tim Jenkins. Tim is also a Colorado native and has a solid football background having played in college, CFL and NFL. His experience through every stage puts him in a unique position to not only train his athletes like pro's, but also shares his experiences to help young athletes stay focused on on their goals on and off the field.

"Ty has a great eye for the game and has a very high IQ in the sport. He pays great attention to detail in film study, white board sessions and group sessions."

Jenkins feels that Ty’s high football IQ is what differentiates him from the crowd. Coach Jenkins sees Ty three times a week to work on his footwork and mechanics while keeping him balanced and aligned in any situation. Tim feels Ty needs to perfect this balance to be the great player he knows he can be at CU and beyond.

Evans works out twice a day, seven days a week with his trainers and coaches. His play style in the pocket is poised and in control not showing any nervousness or rambling with oncoming pressure. His focus now is to get comfortable out of the pocket and make plays on the run. Both he and his trainers feel this is a great asset to have and will put him in positions to make the right play at the right time. When not on the field he spends a lot of time in the weight room. He understands that college ball is a completely different world, but wastes no time while in high school. Getting bigger, stronger, and faster is critical to success regardless of playing in front of school bleachers or in a 50,000 seat stadium. Preparation is key.

The very humble QB is very excited to compete at Nike’s “The Opening” showcase to show everyone what he is capable of and that he can compete with the best of the best. He's ready to have fun, soak up as much information as possible, and have a successful senior year. When asked what he expected from his last high school season he responded, “I don’t really have any expectations at all. I'm just going to go into every game hungry and give my all every game to try and help my team win. I hope we can repeat what we did last year and go 14-0 with a state championship.”

Derrick McCleod
Derrick is a student at Warner University and Bleechr.com contributor. He is studying sports management, communications and marketing and is working towards his degree in Sports Communication.