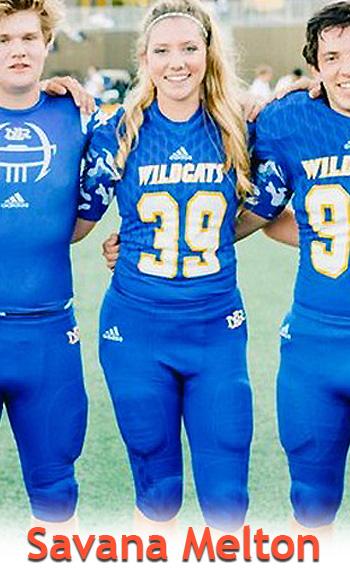 Savana Melton is the place kicker and punter for the North Little Rock High School football boys’ varsity squad. She is 5’11” and has a big leg that can hit true and straight from up close or distance. During the 2016 season for the North Little Rock Charging Wildcats, Savana was 56/58 on PAT's and 7/9 FG's with her longest being 42 yards versus Conway HS in September.

Savana’s leg was busy during the season as North Little Rock went 10-0 and scored an average of 46.4 points per game. Savana, in the October 14th game against the Catholic Rockets, kicked nine extra points as North Little Rock won going away by a score of 66-27. In the final regular season game against the Cabot Panthers, Savana had her best day as a kicker, attempting and making three field goals of 34, 36 and 39 yards.

Savana is one of the young ladies highlighted by Gridiron Beauties that exemplifies their #NoJokeFootball creed and although Savana is a dual sport athlete, she could be one of the first, if not the first female athlete in the NFL as she loves playing football. Savana answered questions for me and bleechr.com:

EL: What is your point of view on a “pressure” kick? What do you think is the difference between a “guys” and “girls” approach?

SM: During a “pressure” kick, I don’t think about it. I know my abilities based on each kick and from practicing so much it has become “muscle memory”. With the support of my team, coaches and fans, I’m confident I will do my best. I think a guy’s approach would be the same as a girl’s. Based on experience, I have realized that accuracy is more important than strength.

EL: What do you like about soccer? And what about football?

SM: Playing these sports has taught me that no matter what the sport, you have to put time into practicing it. I’ve grown up playing soccer and it has given me the strength to play other sports like football. I like football, because I get to display my talents in front of players, parents, teachers, coaches, my community and younger kids. A soccer game can’t compare to a football game. 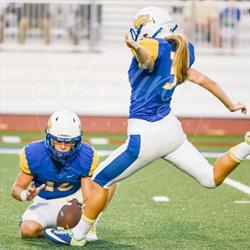 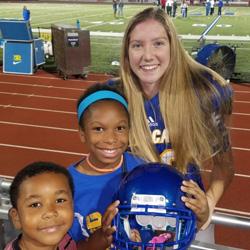 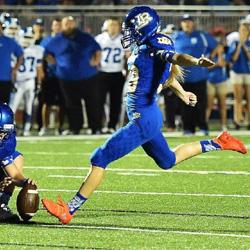 EL: What is your favorite kicking drill to practice?

SM: For soccer, I put a Frisbee against a wall and try to kick the center every time. In football, I practice on a line leading to the goal post and try to put my kicks straight down the line.

EL: What do you want to be when you grow up? Do you think you can be on a college football team?

SM: I want to do something in the medical field. My goal is to play college football!

It is these young women that bolster the Gridiron Beauties creed of #NoJokeFootball. Her and other players such as Brooke Liebsch, Quarterback, Liberty North High School football team and Krysten Muir, placekicker for the Marcos De Niza High School Padres High school varsity team promote the presence that women can play tackle football and play it well. The Independent Women’s Football League and the Women’s Football Alliance are nascent leagues but growing and it would be great to see the sport grow to the level of hallmark women’s sports programs like Women’s Soccer, Lacrosse and Basketball.