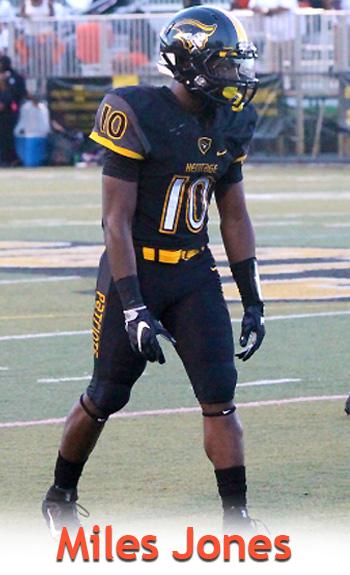 Who is Miles Jones? Depending on who you ask or what article you read, some people coin Miles Jones of American Heritage Plantation as a running back. Others consider him a receiver. Some just say "athlete". And in his 9th grade season at Saint Thomas Aquinas, if you saw him play back-up linebacker, you would scratch your head. The truth of the matter is, he's special. If anything at all hinders him on the field, some would say it's his size. Miles stands at 5'9, 170lbs. Jones argues that his size is a part of the reason he's special. He prefers being compact and unlike most football players, he's perfectly happy with his height. He uses it to his advantage.

His vision, his first step power and elusive speed make up for the lack of vertical size. By the time most defenders realize he's gotten by them, it's too late to do anything about it. While he hasn't made his mark at the varsity level yet, he is one of the most anticipated athletes to watch this season.

During a 2016 spring game Miles touched the ball just four times and averaged 10 yards each resulting in the only touchdown for offense on the day. He was all over the field. In the preseason kick off game against Booker T. Washington, Miles started at slot receiver and kick returner. He touched the ball only five times but averaged 14 yards per touch.

Entering high school, Miles was a local fan favorite after winning four MVP super bowl awards in the AYFL youth football program over his optimist career in addition to picking up the Generation Nexxt South Florida Player of the Year Award. Arguably one of the best optimist players of his time. The summer entering high school, Jones also played AAU basketball leading the Broward County Cougars to a state championship. The spring of his freshman year Miles was also making his mark in track and field. The summer entering his sophomore year play time was at a minimum as he suffered a torn meniscus that sidelined him most of the 2015 season. Not to mention he was playing on a star-studded offense behind a core of great running backs and receivers including Kyshaun Bryan, Khalil Herbert, Brandon Johnson and Nick Eubanks. Although Miles literally only had 29 seconds of varsity footage in 2015 playing in the final regular season game against Hallandale and in the first round playoff game against Fort Pierce, he was electrifying. Those 29 seconds resulted in a 17 yard punt return and a 50 yard touchdown run. 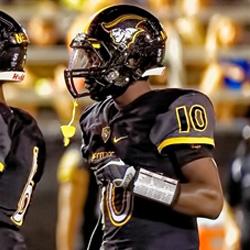 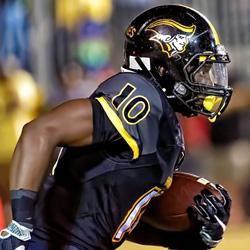 This is literally the first full spring and summer since entering high school that Miles has had an opportunity to really focus 100% on his football craft. His coaches have been cited as saying that Miles is one of their hardest working players on the team. He's worked hard in the weight room and on the  off-season camp circuit. "My goal this offseason was to try to make up for lost time and try to get my name back out there locally and on the national recruiting circuit. I think the local football community may have forgotten about me because I've been quiet. But I'm hoping to change that this season. I'm still the same player I've always been that fights for every yard".

Miles' mentor and trainer, Arturo Freeman says "when he gets that ball in his hand the mild mannered demeanor disappears. He's a different person when he gets that rock." His offensive coordinator, Mario Perez calls him "the playmaker". When we asked Miles whether he will make his impact at running back or receiver, he responded "I can play wherever I'm needed. I just want to help my team win."

Even in the absence of varsity footage, Miles made his mark this spring at the Army National Combine, the Rivals Miami Camp and the Nike Regional Opening being noticed as an up and coming player to watch. He is ranked #116 in the country on the 2016 Nike Rating Leaderboard for his combine results (111.27). His vertical jump is almost 40". His longest broad jump was recorded at the South Carolina Gamecocks camp this summer where he jumped 10'5" and subsequently jumped a 10'2" at the West Virginia Mountaineers camp. These jumps rival some NFL players. In the absence of varsity footage, Miles' remarkable offseason led to a 3 star rating by 247Sports, Rivals and Scout, ranking him in the top 50 for his position nationally. College coaches have neen taking notice and some have even jumped out and made early offers. He picked up three offers this spring from Mississippi State, West Virginia University and Syracuse and has gained interest from South Carolina, Vanderbilt, Florida and FAU. While the latter are cautiously awaiting his breakout season before they offer, there's little doubt Mile's phone will not be ringing in 2016.