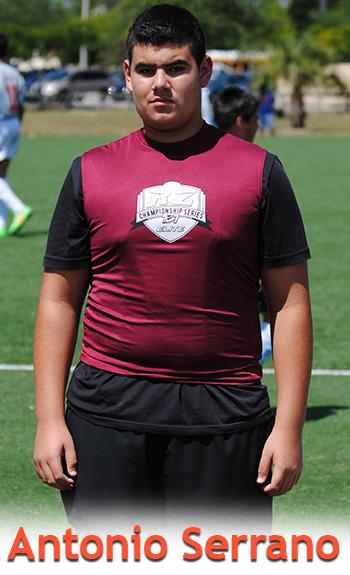 Sometimes size is simply too much to overlook; that’s the case for 8th grade Belen Jesuit offensive lineman Antonio Serrano, better known as “Tank.” At 6’1” and 265 pounds, Serrano has respectable size for a varsity lineman, not to mention a middle schooler. Tank didn’t start his football career until he entered Belen and started on the 6th grade team. He always liked the sport, growing up in Maryland watching the Redskins. His family also has season tickets for the University of Miami Hurricanes, so once he had the opportunity he decided to try it out for himself.

“I liked the contact of the sport and I knew I had the size,” Serrano said of the start of his playing career. He immediately showed he was a natural, dominating middle school defenders and turning heads on the practice field. It didn’t take long before he was dubbed “Tank” for constantly running over defenders in practice.

His prowess as a blocker and talented big man made him the first ever 7th grader to see the field in a Varsity game for Belen, albeit a spring game. The exposure he gained at the varsity level was great for his development, and in 8th grade he was officially moved up to the Varsity squad to face high school talent. While the Belen coaching staff had experimented with him on the defensive side of the ball, Tank is primarily a left offensive tackle that occasionally plays on the right side. There he has made an immediate impact and will undoubtedly be a consistent starter. His growth and speed should make him a standard fixture on the line for years to come. 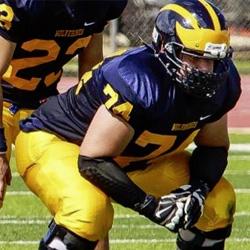 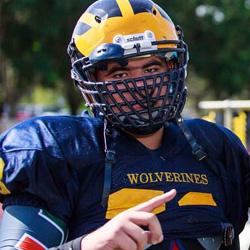 Don’t think the lofty projections are making him arrogant or comfortable with his standing as one of Belen’s best future prospects. Tank attends various combines and skills clinics in the off-season in addition to participating in the Wolverines’ off-season lifting program four times a week. Heren are just a few accolades Antonio has collected so far and he's just getting started.

His hard work and dedication doesn’t stop there. Serrano does extra individual training with Belen’s Track coach, Joey Scott, and offensive line coach, Hector Rodriguez. Scott, who is also an Olympic sprinting coach, primarily focuses on Tank’s footwork and helping him maximize his agility as a big man. Rodriguez concentrates on lineman specific techniques on the Belen Jesuit Varsity as well as the Red Zone Elite Linemen Academy to further Tank’s progression as a player and a force on the line regardless of which side of the ball he’s on. Tank will surely grow both in size and development over the remainder of his high school career making his ceiling as an athlete limitless. As of mid-season 2015-16, Antonio had already accumulated 18 pancakes blocks.

"Tank is one of our sharpest players and as a freshman that says alot. He has solid technique and footwork for being such a young lineman."

When all is said and done however, Antonio “Tank” Serrano will not be denied the spotlight. In fact, he just may cast a shadow on his competition for years to come.